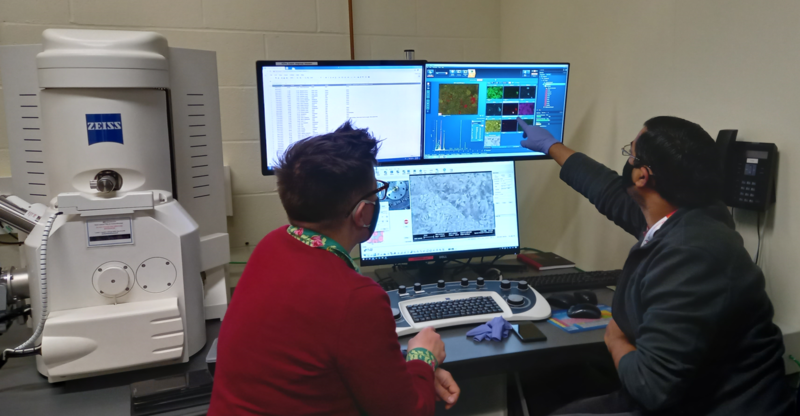 Dr Katrin Wilhem of the School of Geography and the Environment visited the David Cockayne Centre for Electron Microscopy on 5 April to view some SEM-produced data.  Dr Wilhem is making a documentary for Channel 4, exploring the Pollution Clock Project..

Dr Phani Karamached conducted the scan before both he and Dr Wilhelm analysed the data.  The sample was taken from a stone wall from Marylebone Church, and pollution caused by the burning of wood, coal and gasoline was still visible in the crust, some of which was up 200 years old.  Other samples Dr Wilhelm has analysed (such as a sample from New College Lane in Oxford, dating back to the 14th century), contained pollution which was over 400 years old.

We were delighted to be able to assist Dr Wilhelm in this exciting project.  As Dr Wilhelm says:

Consequently, the Pollution Clock Project establishes historic surfaces as long-term geochemical archives to advance air pollution research with implications for healthier cities.  This kind of research is highly interdisciplinary and thrives through collaborations between the social and natural sciences such as between the School of Geography and the Department of Materials".