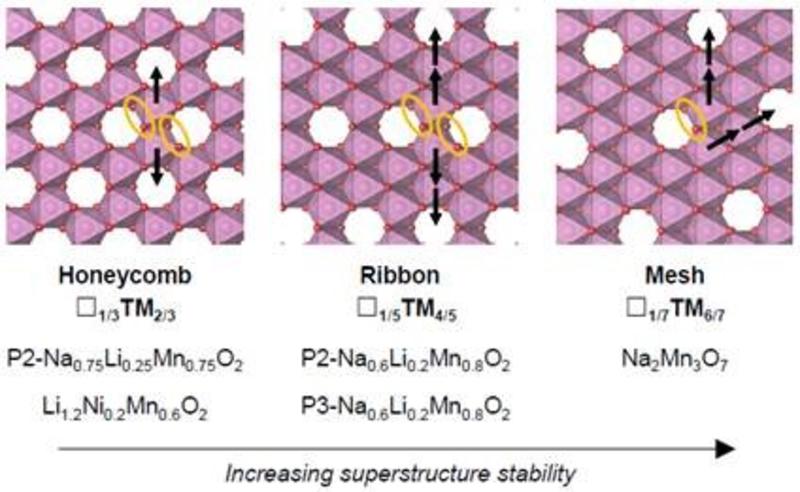 Research by the Peter Bruce Group and collaborators at the University of Sevilla, University of Uppsala and Diamond Light Source, as reported in Nature, explains that Alkali-rich transition metal oxide intercalation cathodes can increase the energy density of Li and Na-ion batteries by storing charge on the oxide and transition metal (TM) ions.

The high voltage associated with oxidation of O2- on the first charge is not recovered on discharge, resulting in significantly reduced energy density.  Displacement of TM ions from the TM to alkali metal layers has been proposed to explain the first cycle voltage loss.

By comparing two closely related intercalation cathodes (Na0.75[Li0.25Mn0.75]O2 and Na0.6[Li0.2Mn0.8]O2), they show that the first cycle voltage hysteresis is determined by the superstructure, specifically the local ordering of Li/TM ions in the TM layers.  The honeycomb superstructure of Na0.75[Li0.25Mn0.75]O2, present in almost all O-redox compounds, is lost on charging, driven, in part, by formation of molecular O2 inside the solid. The O2 molecules are cleaved on discharge reforming O2-, but the Mn ions have migrated in the plane changing the coordination around O2- significantly lowering the voltage on discharge (hysteresis).  The ribbon superstructure in Na0.6[Li0.2Mn0.8]O2 inhibits Mn disorder and hence O2 formation, suppressing hysteresis and promoting stable electron holes on O2- which are revealed by XAS.

The results show that voltage hysteresis can be avoided in O-redox cathodes by forming materials with a superstructure (cation ordering) in the TM layers that suppresses TM migration.