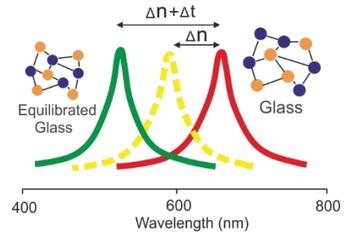 Research by the Advanced Nanoscale Engineering group, as reported in Nano Letters, shows that nanoscale films of Ge doped Se glass (GeSe3) have low optical loss and also exhibit thermally activated tunability in the refractive index as well as in the film’s physical volume.  Such changes, which occur beyond a threshold temperature are observed to be accumulative and directed towards a more equilibrium amorphous state of the film, instead of crystallization. The low optical losses in this material system combined with the tunability in the optical properties in the visible and near-infrared have direct application in higher performing optical coatings and in corrective optics.