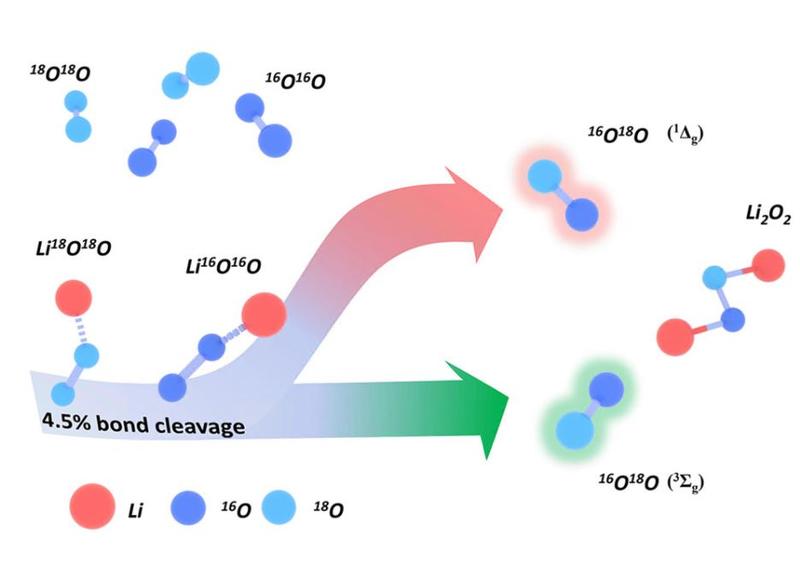 An understanding of how 1O2 is formed is essential for understanding how to eliminate it from lithium-air (oxygen) batteries, and thus avoid battery degradation.  In this paper (*'Singlet oxygen and dioxygen bond cleavage in the aprotic lithium-oxygen battery': Joule Volume 6 Issue 1 2022.) the first experimental evidence for O-O bond cleavage and atomic scrambling of oxygen during discharge in a lithium-oxygen cell is presented.

While only 4.5% of oxygen was found to undergo bond cleavage and scrambling of oxygen atoms, more than 40% of the singlet oxygen produced during the disproportionation came from the scrambling pathway, making it a major source of singlet oxygen generation in lithium-oxygen batteries.

The team from the University of Oxford, Nanjing Tech University, the University of Manitoba, Qingdao Industrial Energy Storage Research Institute and the University of Nottingham demonstrate that Li2O2 formation occurs predominantly by disproportionation, and that by controlling the pathway of this step it may be possible to suppress 1O2 formation, a species that has been implicated in the degradation of lithium-oxygen batteries.