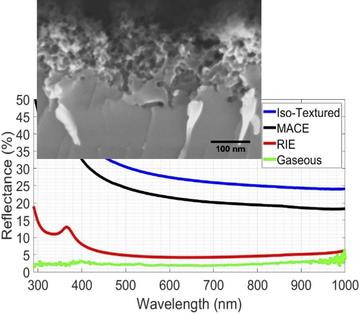 In order to move to a low-carbon future, and avoid the worst effects of anthropogenic climate change, continuing reductions in the cost of renewable energy are required. Oxford Materials researchers in collaboration with international research partners at Fraunhofer ISE in Germany and the University of New South Wales in Australia as well as industry partners, are working to reduce the cost of solar panels by fully exploiting the efficiency of silicon photovoltaic cells. Graduate students would work as part of a dedicated group of researchers on state-of-the-art techniques for improving the performance of crystalline silicon solar cells, which account for over 90% of all currently manufactured solar cells.

Texturing of silicon wafers for solar cell production has been an ongoing concern for cell manufacturers. While anisotropic texturing of mono-crystalline silicon can reduce the weighted average reflection (WAR) of bare silicon to below 10%, most approaches can still benefit from nanoscale texturing methods which absorb light at much wider angles. In this project the graduate student will develop novel texturing approaches for future silicon photovoltaic devices. These techniques will be evaluated in collaboration with international research institutions and industrial partners including cell manufactures and wafer suppliers. If successful this technology will reduce the cost of solar electricity by realizing superior optical performance with a reduced cost of production.