Wear of materials is a complex phenomenon that is not fully understood. The development of instrumented indentation systems (nanoindenters) has provided a platform whereby the sliding contact of single asperities can be undertaken in controlled experiments.

The influence of grain size, and grain boundaries on the nanoscratch response will be studied by performing nanoscratch experiments up to, and across grain boundaries. The effect of crystal orientation on the scratch response will be investigated as the scratch passes through a grain boundary into a grain of different orientation. EBSD, SEM and AFM will be used to study the scratch track as it crosses the grain boundary and proceeds into the next grain with different crystallographic orientation. In situ lift outs of cross sections through the scratch track will be made using FIB, and HR-EBSD will be used to map the subsurface deformation of these experiments. A further strand of work would be to develop crystal plasticity FEA simulations that capture the observed behaviours.  We will begin with experiments on simple model materials representative of FCC, BCC and HCP systems. 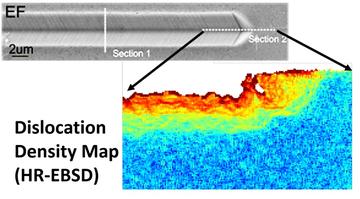