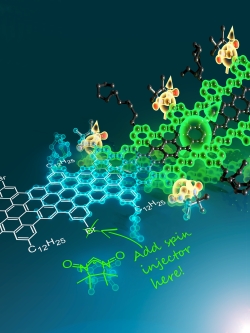 Graphene has been called the wonder material, and its mechanical and electric properties never cease to amaze. Theory predicts that it could show magnetic properties too, if we could control the geometry of ist edges at the single-atom level. Such magnetic graphene would allow testing some very fundamental assumptions about graphene, and yield excellent building blocks for quantum computing machines. Now this theoretical prediction has become true: chemists and physicists have joined forces to create atomically-perfect graphene nanoribbons in huge quantities. In addition to validating and disproving a number of fundamental theoretical proposals, they found out that the quantum properties of the new material are actually astonishingly promising, yielding coherence times good for quantum operations at room temperature already without any type of optimization. Such results, when single-electron transport is realized with similar nanoribbons, could usher a new era quantum electronic devices.

Details of recent findings are reported in Nature by Professor Lapo Bogani and co-workers.