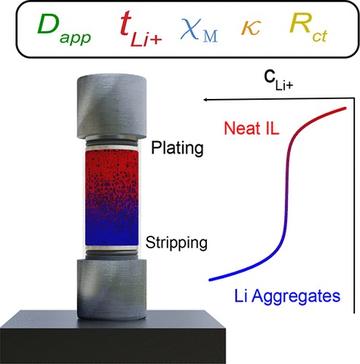 In their paper 'Insights into the transport and thermodynamic properties of a bis(fluorosulfonyl)imide-based ionic liquid electrolyte for battery applications' (published in Journal of Physical Chemistry Letters) Jack Fawdon and his colleagues and collaborators considered the relatively high viscosity and poor Li+ diffusion, and the idea that the formation of large concentration gradients reduce rate capability.

The analysis of these concentration ingredients led to insights into the bulk structure of ILEs, and it is proposed that they are composed of large, ordered aggregates.