Most metals have, at some stage in their processing, been in the liquid state. Such metallic melts can be chemically dirty (containing impurities and dissolved gases) and physically dirty (containing unwanted hard particles, oxide films etc). It is now becoming accepted that the cleanliness of a melt can significantly influence the ease with which a melt can be handled and cast, and the properties of the final components into which it is made. This project will investigate the effect of melt cleanliness in Al alloys. Novel intrinsic and extrinsic methods will be developed, including chemical doping and thermal excursions of the melt, in order to improve melt cleanliness. Melt cleanliness will be measured in-house both directly in the melt and by investigating the effect on primary grain size and properties. The effectiveness of these novel methods will be compared to current industrial methods such as rotary flux degassing and filtration. The overall aim is to develop new methods for improving melt cleanliness which are both quicker and cheaper than existing technology, while being suitable for use on an industrial scale.

Grain refiner additions, impurity levels and melt cleanliness have all recently been shown to individually affect secondary intermetallic phase selection in Al alloys. In turn, the type, size and morphology of such intermetallics can significantly affect the ability to carry out downstream processing and the mechanical properties of final components. This project will investigate the effects of combining these and other factors (such as solidification conditions) in order to determine the dominant factors affecting intermetallic selection under more realistic, commercially relevant conditions. 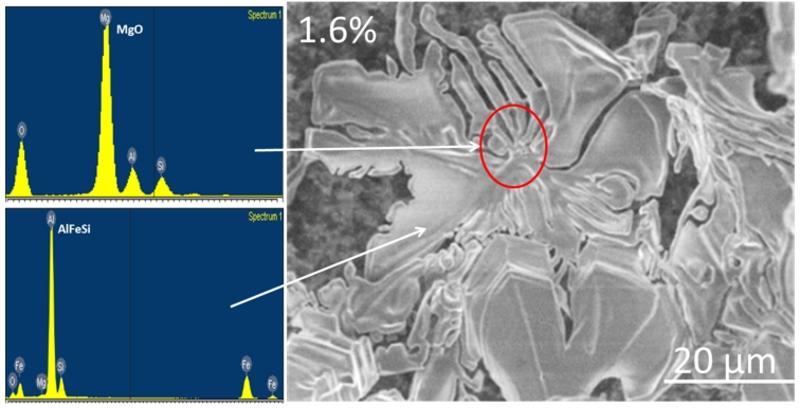 Energy dispersive x-ray spectra and scanning electron microscopy image demonstrating an association between an MgO particle and an intermetallic particle extracted from an aluminium alloy.