The geometric blueprint of perovskites 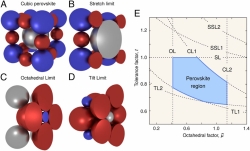 Perovskites constitute one of the most versatile and chemically diverse families of crystals. In perovskites the same structural template supports a staggering variety of properties, from metallic, insulating, and semiconducting behavior to superconducting, ferroelectric, ferromagnetic, and multiferroic phases. Approximately 2,000 perovskites are currently known, including those used in high performance solar cells as discovered in Oxford in 2012.  Researchers Marina Filip and Feliciano Giustino report in PNAS and the Oxford Science Blog a library of compositions predicting the existence of 90,000 new perovskites by combining elementary geometric ideas with high-throughput data analytics. These predictions hopefully will lead to the realization of entirely new functional materials for electronics, lighting, energy, sensors, and detectors.