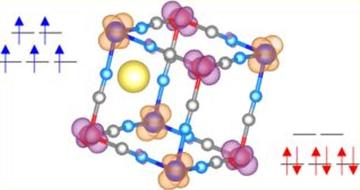 In this paper, Kevin Hurlbutt and his collaborators explored the electronic conductivities of Prussian blue analogs (PBAs).  Using density-functional theory, they modelled the electronic structure and the likely electron-conduction mechanism of manganese, iron and colbalt hexacyanoferrate in three oxidation states.  This study is an important foundation for making electronic conductivity a tunable PBA material property.

Published in Theoretical and Computational Chemistry, their paper 'Electronic structure and electron-transport properties of three metal hexacyanoferrates' demonstrates that the hybrid functionals reliably reproduced experimentally observed spin configurations and geometric phase changes.  The materials are confirmed as semiconductors or insu-lators with bandgaps ranging from 1.90 eV up to 4.94 eV.

The researchers then identified that most of the electronic band edges originated from carbon-coordinated-iron orbitals, which suggested that doping at the carbon-coordinated site might strongly affect carrier conductivity.

The final stage was to calculate the charge-carrier effective masses, which they found were very heavy.