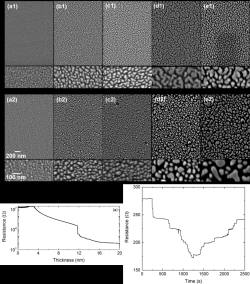 Researchers in the Surface Nanoscience Group report in Applied Physics Letters evidence of stepwise control of resistivity in thin gold layers. When a thin gold film is deposited the electrical resistance of the film decreases from fully resistive at the start of deposition to close to the bulk resistance for thicker films. We’ve found that, instead of a smooth decrease, this resistance change occurs in discrete steps. The steps are attributed to conduction through newly formed electrical pathways in the discontinuous film being created as more gold is deposited. Scanning electron microscopy images confirm the discontinuous nature of the films and show that thicker layers are more connected. Annealing such films causes them to dewet, decreasing the number of conductive pathways and causing a stepwise increase in the resistance of the film. This control over the electrical resistance of the layer as well as the size and separation of the particles opens up new opportunities for various applications of discontinuous metal films.