Complete mapping of the thermoelectric properties of a single molecule 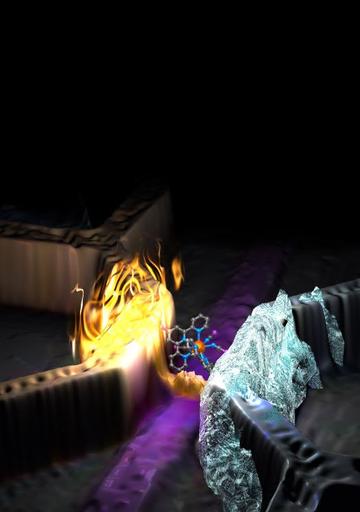 An international team with a collaboration forged in Oxford has managed to master the creation of electrical currents through single molecules just by applying a thermal difference between the two electrodes.  This can possibly lead to thermoelectric energy harvesters with unprecedentedly high efficiencies.

Several methods had been proposed optimising molecule length, and optimising the tunnel coupling strength of molecules via chemical anchor groups, or by creating localised states in the backbone with resulting quantum interference features.

The new work uses a novel measurement protocol that simultaneously probes the conductance and thermocurrent flow as a function of bias voltage and gate voltage.  The resulting thermocurrent is strongly asymmetric with respect to the gate voltage, with evidence of molecular excited states, and features can be reproduced by a rate-equation model only if it accounts for both the vibrational coupling and the electronic degeneracies.

The work can thus directly probe the interplay of electronic and vibrational degrees of freedom, and the role of spin entropy in single molecules.  As a result, the team not only achieved record high thermocurrent efficiencies, it also pioneered the spectroscopy tools necessary to investigate thermocurrents in molecule-based quantum transport setups.