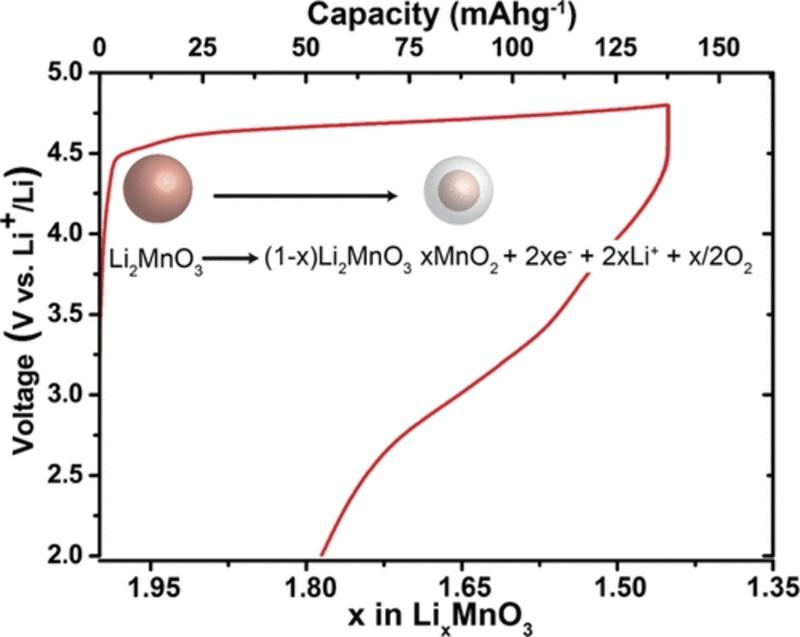 Research by the Peter Bruce Group and collaborators at the University of Uppsala and JASRI, as reported in Chemistry of Materials, describes that Operando mass spectroscopy demonstrates quantitatively that lithium extraction from Li2MnO3 is charge compensated by oxygen loss (O-loss) not oxidation of oxide ions that are retained within the structural framework (O-redox). This fact is confirmed by X-ray absorption and emission spectroscopy. Li NMR shows that the two-phase core–shell structure, which forms on charging, is composed of an intact Li2MnO3 core and a highly disordered shell containing no Li, with a composition close to MnO2. Discharge involves Li insertion into the disordered shell. CO2 and O2 are detected on charging at 15 mA g–1, whereas charging by galvanostatic intermittent titration technique (GITT) forms only CO2; an observation in agreement with the previously described model of oxygen evolution from high-voltage cathodes producing singlet O2 that reacts with the electrolyte forming CO2. The dominance of oxygen evolution over O-redox is in accordance with the model of O-loss occurring when the oxide ions are undercoordinated; O in the shell devoid of Li is coordinated by only 2 Mn.