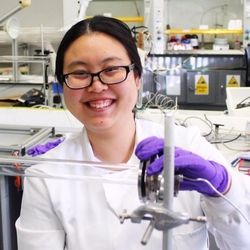 Very many congratulations, Santamon Luanwuthi, for securing the 2018 Engineering and Technology Anglo-Thai Education Award for her work on engineering SiC nanomaterials for battery applications. The Anglo-Thai Society annually celebrates the exceptional talent of Thai PhD students studying at UK universities across a wide range of academic disciplines. The awards are generously supported by the Royal Thai Embassy, commercial organisations and individuals. Candidates are nominated for consideration by their academic supervisors and their work is assessed by an independent panel of distinguished academics. This year the Anglo-Thai Society received a record number of applications and Santamon is the only Oxford student who has received the award this year.