Niobium Dioxide as an Alternative to Graphite Anode 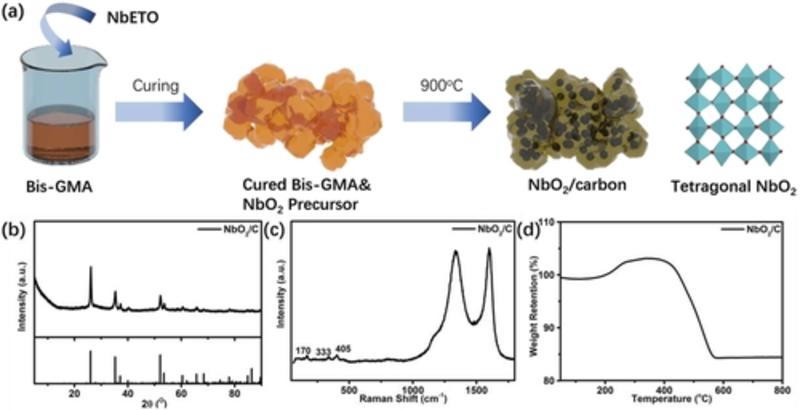 Research by the Peter Bruce Group and collaborators at the Ningbo Institute of Materials Technology and Engineering, The University of Nottingham at Ningbo and University of Chinese Academy of Sciences, as reported in Advanced Functional Materials describes that Niobium dioxide (NbO2) features a high theoretical capacity and an outstanding electron conductivity, which makes it a promising alternative to the commercial graphite negative electrode. However, studies on NbO2 based lithium‐ion battery negative electrodes have been rarely reported. NbO2 nanoparticles homogeneously embedded in a carbon matrix are synthesized through calcination using a dental resin monomer (bisphenol A glycidyl dimethacrylate, Bis‐GMA) as the solvent and a carbon source and niobium ethoxide (NbETO) as the precursor. It is revealed that a low Bis‐GMA/NbETO mass ratio (from 1:1 to 1:2) enables the conversion of Nb (V) to Nb (IV) due to increased porosity induced by an alcoholysis reaction between the NbETO and Bis‐GMA. The as‐prepared NbO2/carbon nanohybrid delivers a reversible capacity of 225 mAh g−1 after 500 cycles at a 1 C rate with a Coulombic efficiency of more than 99.4% in the cycles. Various experimental and theoretical approaches including solid state nuclear magnetic resonance, ex situ X‐ray diffraction, differential electrochemical mass spectrometry, and density functional theory are utilized to understand the fundamental lithiation/delithiation mechanisms of the NbO2/carbon nanohybrid. The results suggest that the NbO2/carbon nanohybrid bearing high capacity, long cycle life, and low gas evolution is promising for lithium storage applications.