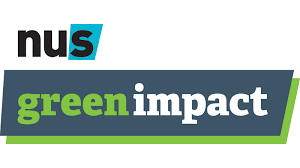 The Department of Materials supports the NUS Green Impact award scheme. The scheme is a National Scheme for bringing together staff and students to acheive behaviour change across a wide range of issue under the umbrella of sustainability.  Across the University of Oxford activities are promoted by the Uniiversity Estates Environmental Sustainability team.

Below lists some of the aims and our achievements so far.
What can you do differently to reduce waste and save resources? 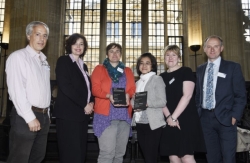 On 12 June 2017 the University of Oxford held the annual NUS Green Impact Awards presentations in the Sheldonian Theatre. The Department of Materials was awarded 'Silver' for general environmental practices, 'Silver' for the labs. Congratulations to the Committee for their tireless work throughout the year raising awareness and implementing new schemes to promote sustainability.

The Green Impact team are intending take a year off to consolidate our existing achievements before returning in 2018-19 with renewed vigour! 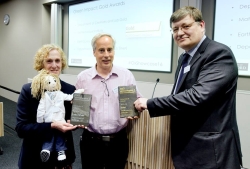 On 15 June 2016 The University of Oxford held the annual local Green Impact Awards at the Blavatnik School of Governance.  The Department of Materials was awarded 'Gold' for general environmental practices, 'Silver' for the labs and a special 'Innovation' award for Milly, the mascot.

The judges were particularly impressed by Milly's T-shirt which is multi-use; the logo on the front can be changed without requiring a fresh garment, thus lowering her carbon foot- print.  This idea can also be scaled up to adult-sized T-shirts.  Special thanks go to Jane Foxall for designing and making Milly from recycled/re-used materials, and also to Rebecca Bradford and Debbie Townsend for helping make Milly so innovative.

The department would also like to thank Katarina Martinovic for all her help during this year, and in particular for organising the very first Great Materials Bake-Off. 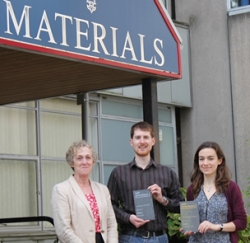 In 2015 the Department of Materials achieved two awards; Silver for the Department and Gold for the Labs! We were one of two Departments within the entire scheme to be presented with two awards, so this is a huge achievement!

Congratulations, and thanks are due to Mimi Nguyen for all her hard work in transforming the labs into Gold standard working environments, and to the Committee for their tireless work throughout the year raising awareness, implementing new schemes and fundraising; Les Chorley, Alana Davies, Jing Hu, Nina Klein, Lorraine Laird, Euan McTurk, James Marrow and Paul Warren.

Congratulations to everyone and keep up the good work!

Did you know that roughly 600 devices use the Materials Department network each day? These devices use about 40 kW of electricity. In the Maths Department usage drops by 50% at night and at weekends but in Materials usage only drops by 15%.

Materials scientists do work very hard and at all hours; but do our computers need to be running overnight?

It’s reckoned that 1 kWh is the equivalent about 0.5 kg of CO2 emitted by fossil fuel generation of electricity, so our computers are producing about 3 tonnes of CO2 per week, which is equivalent to the carbon footprint of manufacturing 10 average computers…..

Before buying new, check whether someone else is disposing of unwanted old equivalent items using WARPit (Waste Action Reuse Portal).

The "Oxford University Staff Gateway gives a lot of advice on Travel and Transport, including ways to reduce your environmental impact.

Despite the recent floods, conserving water is becoming an increasingly important environmental issue. We can all help to this valuable resource by changing our habits, in particular:

As of February 2016, our new caterers in the Holder Building Cafe in Parks Road have clearly labelled up their bins. Please split your rubbish into the appropriate bins.  BaxterStorey will then arrange for as much as possible to be sent to a recycling unit.

It is Departmental policy to reduce waste whenever possible.(Newsletter 20150313)

Our aim is to avoid sending items to landfill wherever practically possible.(Newsletter 20150227)

BaxterStorey, our caterers in the Holder Building Cafe, are keen to use Fairtrade whenever they cannot use local ingredients, and ran a FairTrade promotion throughout Hilary Term.  Their ingredients are organic and locally sourced as much as possible, and those items which cannot be local (such as chocolate) are FairTrade or another similar ethically-minded supplier.

The Department is keen to promote key environmental practices in all areas, even within the teaching programme.  Professor James Marrow delivers a lecture course Materials for Energy Production which emphasises the need to implement a sustainable future energy supply strategy and discusses the technologies which might enable this.

Rob Saunders in our IT Team vounteered to shave his head and donate the hair to the 'Little Princess' charity, which produces wigs for children suffering hair loss as a result of illness or medical treatement.  Rob also collected the very impressive sum of £360 in sponsorship, all of which was donated to the Little Princess charity.

Paula Topping has just returned from voluntering her time at the 2nd Winter Youth Olympic Games, held in Lillehammer in February 2016.  Paula's superb efforts ensured the events was a huge success!  See Newsletter edition 21 Volume 2 of 3, dated 4 March 2016 for more information and pictures.

The very first Great Materials Bake Off took place during Trinity Term.  The winners were Gabrielle Bourret-Sicotte and Matthew Cyrson for their ingenious solar panelled cake - it looked and tasted amazing!  All the cakes were sold after the competition, to raise funds for the World Wide Fund for Nature.  We raised £67.45!

Support for Biodiversity and Nature

The Green Impact Committee plan on joining other Departments and Colleges with the tree-planting at Wytham Woods later this year.  More details to follow.